Lou DeLaby is the longest-serving employee at RECC, officially at 40 years, but he can add even a couple of more summers to that total. He worked two summers while in high school as a temporary groundman, before joining the co-op full-time in October 1972 as a groundman. He’s worked ever since in the line department, and now heads that department as Manager of Operations and Maintenance.

In 1976, Lou became a Journeyman Lineman, learning the skills of overhead and underground electrical systems. He was one of the many linemen working tirelessly after the April 1978 ice storm to rebuild the lines after every member had lost electric power. He went on to work as a service man for six years, installing meters and security lights and other small jobs. 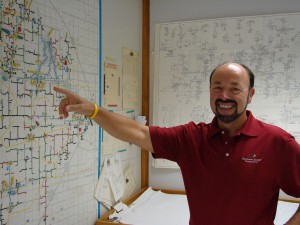 When Delbert Boston retired from RECC in March 1997, Lou was named as department manager. He has helped guide the co-op through the introduction of new technologies including automated meter reading, outage management system, and digital mapping. His department also took over responsibility for the co-op’s nine substations and 22 miles of transmission line that were purchased when RECC changed power suppliers in 2009.

Lou is a member of the Job Training and Safety Committee for the Association of Illinois  Electric Cooperatives, and has completed the NRECA Management Intership Program. He is a certified Loss Control professional.

Lou is also heavily involved in the National Utility Training & Safety Education Association (NUTSEA), an organization comprised of utility safety and training professionals from various backgrounds throughout the United States. He serves on the Board of Directors for the distribution section.

Congratulations to Lou on reaching this significant milestone at RECC! It’s becoming a rarity to stay in one industry for an entire career, but he has been with one company, in one location, since his high school days!